Kid’s Self Defense Classes in Texarkana

Kids often get bullied and fairly often get in physical fights. 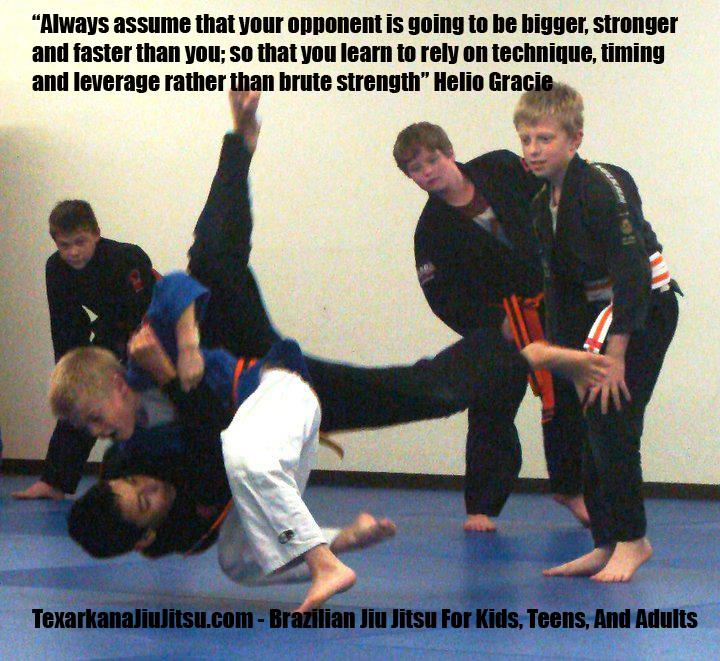 Discover how to ensure your child can protect themselves with the secret of Brazilian Jiu Jitsu to prevent your son or daughter from being bullied or beaten up.

They really need the confidence that they can defend themselves… and often that’s all it takes to prevent both bullying and fights.

The only way to develop that confidence is through experience and training which is what we do at Texarkana Jiu Jitsu. It’s the reason many parents put their kids into our martial arts program.

But why Jiu Jitsu, why not karate or tae kwon do?

All martial arts offer a child some positive benefits.

Brazilian Jiu Jitsu offers several real advantages for a child if they need to defend themselves against another child.

Brazilian Jiu Jitsu teaches them to close the distance, take the child down, and control them in a way that prevents the other child from hitting or hurting them.

Even if your child doesn’t get the takedown but is taken down – they will be able to defend themselves.

A common situation in a fight for a child, they punch each other a few times and then both fall to the ground.

If on the bottom, what should your child do to protect themselves if they can’t stand up?

This is where Brazilian Jiu Jitsu has the greatest effectiveness.

It takes a bad position and turns it into a position of dominance where they can’t be hurt AND they do not have to hurt the other child.

Another thing to consider is that other martial arts teach the child to punch or kick the other child in the head.

This has real potential to cause the other child serious harm. It also looks very bad to the school or authorities that may be involved in the situation.

Brazilian Jiu Jitsu allows the child to safely end the fight without getting harmed or even having to harm the other child.

This ability to defend themselves off their back is even more important for your daughter because far too often at some point in their young life she may be put there against a bigger, stronger, more aggressive boy/teen.

We don’t have kids go off in a corner and practice a series of movements punching and kicking the air by themselves.

Your child will be interacting with other kids which has real social value especially in today’s modern electronic media environment.

It helps teach them how to interact with their peers and how to work with others.

Brazilian Jiu Jitsu is a grappling based martial art.

This is important because as mentioned above, it means the kids can handle a fight without injury to either child.

It also means that your son or daughter can train with in a real environment, using the techniques they learn in a safe way.

In striking based martial arts, the kids have to practice in a way that is not consistent with a fight. They can not kick each other in the head (or at least shouldn’t!) in training because obviously the risk of concussions and other injuries.

In Brazilian Jiu Jitsu, the child can train everything they learn against another child without the fear of causing serious injuries.

This type of training has so many benefits beyond being able to use it in a real fight.

It also is a full body workout that will get your son or daughter in shape which is so important in today’s society when so many kids are becoming obese and developing lifestyle related chronic diseases.

Brazilian Jiu Jitsu is also a lot of fun for kids which means they’ll enjoy the training and make many new friends in a positive environment.