I want to talk about my early journey in Brazilian Jiu Jitsu. 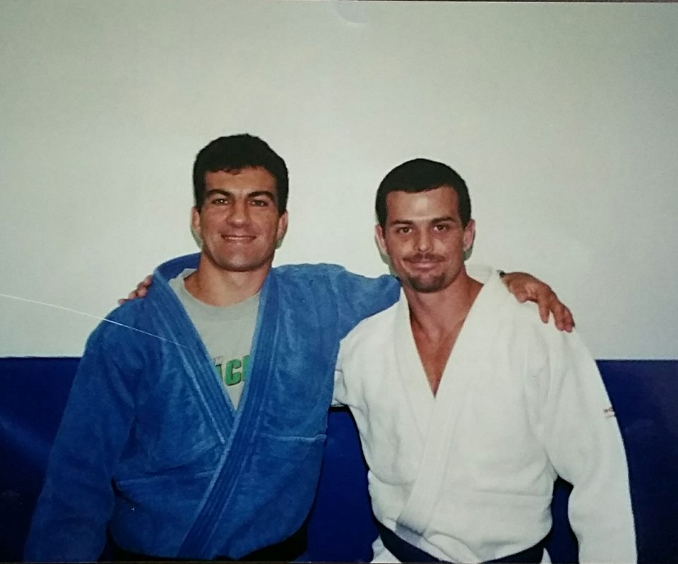 I began training Brazilian Jiu Jitsu in 1995. I had been training and competing in Judo at the time under Vince Tamura.

I discovered that Carlos Machado (a cousin of the famous Gracie family out of Brazil and one of the world famous Machado Brothers) had just opened the first BJJ school in Dallas.

I discovered this was competing in a judo tournament over Thanksgiving weekend in Dallas.

By Monday, I was in my first Brazilian Jiu Jitsu class on the set of Walker, Texas Ranger.

In a story that sounds crazy…

Chuck Norris had brought Carlos to Dallas to train him and set up a space off to the side of the Boxing Ring that you can see on many of the episodes.

I started training even though it was a very hectic time for me.

I was in chiropractic school and the course load was ridiculous with some semesters having 38 hours of classes… more than 3 times what colleges consider full time.

I trained both Judo and Brazilian Jiu Jitsu while taking this course load.

He decided to start a Competition Team that would have secret team practices and was special invite only.

I was one of maybe 10 or so people invited to represent our school in CA.

I jumped at the opportunity to get in some extra training and the chance to compete… even though I had no idea what I was getting myself into at the time.

I have always believed that competition helps people improve faster than they would otherwise because they have a specific goal and a time frame to accomplish it. I also believe in preparing to compete to the best of your ability and that takes sacrifice.

In this case, I sacrificed some highly valuable sleep in addition to time with my wife, friends, and any free time.

We started training at 6 AM 3 days a week while continuing training at lunch and in the evenings.

I trained 10 (or more) times a week between both BJJ and Judo to prepare for the competition.

I was fortunate enough at the time to be able to do very well in graduate school even with all that training, so I trained. If this wasn’t the case, I would have changed my training.

As it turned out though, the training was a great experience.

A week or two before the Pan Ams, we were promoted to blue belt even though we might have been training 6 months or less. There was no white belt division at the time so to compete we had to be blue belts.

I had no idea what to expect in the tournament. I thought at the time that it would be very similar to Judo and the Judo competitions I had done in the past.

Ultimately, I ended up being one of two students that won a match in CA that day. The first match I secured a choke very quickly. I think the match might have lasted under 30 seconds.

I was the only student to not have any points scored against me. I lost my 2nd match on a ref’s decision. I have to admit I was frustrated losing but I also have to admit my opponent was much better than me and I was lucky to not get submitted in the match.

Setting specific goals and doing what it takes to try to hit them helps anyone achieve more.

Even though I didn’t win a medal, the preparation and the experience made me better than I would have been otherwise.

It definitely helped that I was able to get in so much extra training.

It helped us all. None of us would have been as prepared without it.

It’s a good example of a Coach going out of his way to help his students be prepared.

I do my best to follow his example at my own school, Texarkana Jiu Jitsu and Fitness.