Being Bullied Is Devastating For Kids.

Bullying has been in the news often over the last few years. 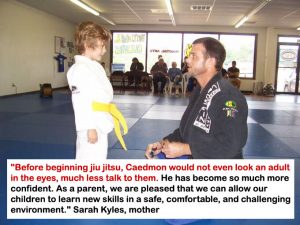 Hardly a day passes without there being a story about a child who was at the receiving end of bullying. Sadly bullying can have devastating consequences.

When we look at the problem of bullying, it’s important to do it from both sides. Why are some kids the targets of bullies – and why do some kids feel that they need to bully others?

This is a big topic, so I’m splitting it into two posts.

Let’s start with the kids being bullied.

How can Brazilian Jiu Jitsu martial arts training in Texarkana help them?

There are generally a few things that can make a child the target of bullies. It’s not the child’s fault, but bullies have a way of picking out kids who the bully feels is vulnerable for some reason. These vulnerabilities might include:

These are all issues that studying the martial art of Brazilian Jiu Jitsu can address.

Let’s take them one at a time.

Some kids are naturally self confident and others aren’t. A child who has a high level of self confidence is unlikely to be targeted by bullies.

Why? Because the bully also lacks self confidence and will be afraid of bullying someone that is showing confidence. Kids with a strong sense of their own worth will brush off attacks by bullies, so even if they are bullied it isn’t nearly as big a problem for them (there’s a lot more to this).

A child who lacks confidence, on the other hand, is easier perceived target. A bully knows that by picking on someone who doesn’t understand their own worth, they can feel superior while believing there will be no repercussions from the other child.

Kids are creatures of habit. Every kid wonders if they’re “normal,” and sometimes, a kid who’s different is bullied because they make the bully feel uncertain. They bully to reassure themselves that they’re normal.

Finally, some kids are more aggressive than others. They might get their sense of self-worth from attempting to be physically dominant. It’s easy to dominate someone who they believe can’t defend themselves. Kids who aren’t as athletic, physically strong or coordinated can often be targeted by bullies.

What does any of this have to do with martial arts and Brazilian Jiu Jitsu?

In other words, studying the Brazilian Jiu Jitsu makes kids a less attractive target for bullies. To sign your child up for a SPECIAL trial membership, click here.

In another blog post we’ll discuss the other side of bullying and what’s going on with the bullies. Keep an eye out for it!