How long does it take to get rank in Jiu Jitsu? | Texarkana Jiu Jitsu

How long does it take to get rank in Jiu Jitsu?

Rank In BJJ and Other Ju Jitsu Martial Arts

Often when a person begins training in martial arts they are interested in better understanding rank. Even before starting a program, a person may wonder what the rank of the instructors or other students means. 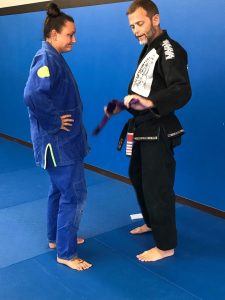 In Brazilian Jiu Jitsu, rank is primarily determined by performance within the ‘game‘ of BJJ. There are certain areas that a person develops in Brazilian Jiu Jitsu. The person will need both knowledge and the ability to use that knowledge against an opponent. This is different from some traditional martial arts that only require or mostly require the knowledge of a technique without the emphasis on performing the movements against a resisting opponent.

The time it take to get a black belt in BJJ varies depending on many of the things mentioned below. On average, it’s 8 to 10 years of training for most adults. As mentioned below though, there are so many more reasons to train than to get a belt!

Our head coach, Dr. Marc Hagebusch, is a 4th degree BJJ black belt under Master Julio Pereira who is the head of Grappling Fight Team. We also have 4 other BJJ black belts training at our gym in addition to many very experienced students who all help newer students start training and progress more easily in the art.

A common question is, “How long does it take to get rank in Jiu Jitsu?”

It depends! Yes, great answer I know! Let me explain…

What does it depend upon?

The particular style of Jiu Jitsu because there are many. Although the spelling is commonly used in Brazilian Jiu Jitsu versus the traditional Japanese Ju Jitsu styles.

It depends upon the instructor as different instructors even within the same style often have different requirements or things that they want to see for rank.

It also strongly depends upon you.

I want to make an important point here that goes beyond the question.

It’s much more important what you become rather than the rank itself.

Does it really matter to get rank or is it the knowledge and skills that are important?

It’s not a colored piece of cloth around our waist that is really the benefit of training. It’s what we overcome and how we develop over time.

It’s the training, the fitness, reduced stress, confidence, the changes in mindset about what is possible for you, it’s the friends and the socialization with your team mates, and much more that are so meaningful when training in martial arts.

Having said all that, the rank is a measurement and it does have value in that it is recognizing a person’s progress and work.

Rank in the end matters in that it’s a marker of performance in the art.

Still I would focus on self improvement and training – the rank will take care of itself usually.