Should I Train Judo or Brazilian Jiu Jitsu for Self Defense? | Texarkana Jiu Jitsu

Should I Train Judo or Brazilian Jiu Jitsu for Self Defense?

What’s Best, Judo or BJJ for Self Defense?

Judo and Brazilian Jiu Jitsu (BJJ) are both very closely associated grappling based martial arts that can be highly effective in self defense. 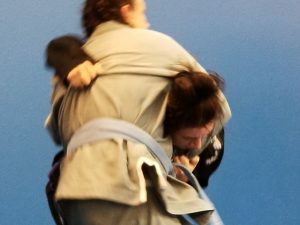 There are some differences based on the rules of sport competition as to how training focuses on different things.

There’s also a significant amount of differences from gym to gym, school to school in the same art.

Judo for Self Defense

There is a little less variation in curriculum between Judo schools, but it’s still very variable depending on the coach.

Judo tends to really stand out in the clinch/throwing department.

There’s more to Judo though with

My Judo instructor, the late Vince Tamura, was ‘old school’ and taught his family’s style of jujitsu as well as Judo in a pretty well rounded curriculum that still predominately focused on competitive Judo for the most part.

I don’t think the self defense techniques were necessary to allow any of the Judoka I trained with to defend themselves.

The throws, conditioning, and the groundwork would give you a huge advantage in a fight over an opponent that likely knows nothing in the grappling area either stand up or ground.

Brazilian Jiu Jitsu for Self Defense

Brazilian Jiu Jitsu may be the best art for you. It depends.

As far as self defense goes, the greatest danger is when you are in close combat – not when you’re throwing punches at each other.

If you aren’t in the clinch already you are likely able to get away in most situations.

In close combat, a Brazilian Jiu Jitsu practitioner is going to have a huge advantage over the average person.

The school curriculum matters. If there are no clinch or takedown techniques it might not be ideal for self defense.

I haven’t done a formal  survey of BJJ schools, but I would guess the vast majority teach some stand up grappling to varying degrees.

At my school, Texarkana Jiu Jitsu, we spend a significant amount of time on takedowns in our Brazilian Jiu Jitsu classes although not as much as the average Judo school.

This time is vastly more than the individual you are likely to fight in a self defense situation has in stand up grappling… and more than the average BJJ school.

The ground matters, a lot, particularly for women who in the worst scenario will be put on their back against likely a bigger, stronger male… but the ground matters for everyone that gets in a fight.

Mostly to be able to get up or sweep from the bottom, as well as being able to dominate in the top position.

In the end, both arts can be excellent for self defense. We train predominately Brazilian Jiu Jitsu but include many throws from Judo due to our head coach’s background in Judo as well as BJJ.

They also both will bring so many other benefits to your life ranging from fitness to confidence, socialization with other great people that are trying to better themselves, and a lot more!