"Should I train Karate or Jiu Jitsu?" | Texarkana Jiu Jitsu

“Should I train Karate or Jiu Jitsu?”

“I’m thinking about doing martial arts and I don’t know if I should do Karate or Jiu Jitsu. Any suggestions?”

“Should I train Karate or Jiu Jitsu?”

Many people looking to get started in a martial art don’t know what different styles offer or how they might train so that they can choose an art that would be best for them.

Here are some of the things that differentiate these 2 very different styles, but first…

What do you want to accomplish? 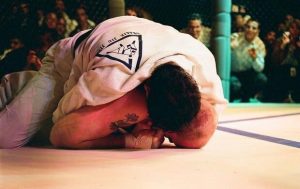 This is a very important consideration. Different people have different goals and interests.

Some people are looking for self defense while others might be interested in sport competition – including MMA (UFC style competition), fitness, confidence, stress reduction, or some other reason that they want to train in a martial art.

Some people might like learning a historical art or traditions from a thousand years ago whereas others might only care about effectiveness of a martial art.

In broad generalizations – traditional martial arts including many styles of karate focus upon traditions and the historical methods of training.

Combat sports and martial arts will focus much less on this and have a heavy emphasis on only training what will work against a resisting opponent today.

There’s not a right or wrong answer to these ideas. People should pursue things that they enjoy.

I would also say that there are a huge number of different martial arts. I’m not sure why it’s between these two only.

Another important consideration… What do you really enjoy doing?

Karate speaking in very broad generalizations will tend to be punching and kicking. The training methods might include some sparring, although often not much until you advance. The particular style and school/instructor will possibly have a greater emphasis on fitness or self defense.

I would guess all spend a lot of time doing kata. Katas are long pre-choreographed sequence of movements involving blocking, changing directions, punching and kicking the air. There tends to be much more isolated, solo training in various styles of Karate versus styles of Jiu Jitsu.

Brazilian Jiu Jitsu is a type of Jiu Jitsu that has gained a lot of popularity due to it’s involvement in mixed martial arts and the UFC. Even within BJJ, different styles and emphasis will exist ranging from self defense to MMA, sport competition, etc.

The idea of BJJ is to neutralize an opponent’s size and strength advantage while taking away their most dangerous weapons (striking) by putting them in a position where they are not a threat and then determining the appropriate level of force to end the match/fight.

This is typically done with a choke/strangulation or a joint lock. It can also be done with strikes from the dominant position where the person can strike without having to worry much about defenses or getting hit.

Most BJJ training is markedly different than most Karate training.

In BJJ, every movement needs to be able to be done against a resisting opponent. Practice generally involves a lot more sparring type training. BJJ also does not involve Kata or long per-choreographed sequences of movement.

What Martial Art Should You Train In?

Being a 4th degree black belt in Brazilian Jiu Jitsu who has trained in other styles including Shotokan Karate, Tae Kwon Do, Kickboxing, Wrestling, Judo, and MMA – I recommend Brazilian Jiu Jitsu, but I am admittedly heavily biased in my thoughts about martial arts.

I do think that Brazilian Jiu Jitsu offers so many benefits ranging from developing a very high level of fitness to self defense, sport competition, socialization, stress reduction, and of course fun… BUT everyone is different, do what is best for you.