The Secret To Nailing Your New Year’s Goals

The Truth About Goals and Achievement. 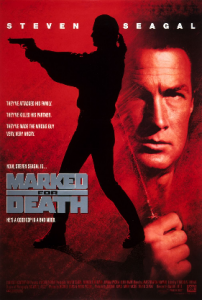 What can I say, I’m a lifelong martial artist so I’ve watched all kinds of martial arts movies.

The movie joined the rest of Seagal’s movies in making Aikido look both cool and effective. In the real world let’s just say for the majority of people it doesn’t really do either.

Shout out to the movie Game Changers which did the same thing by convincing people that vegan diets are healthier and better for athletic performance!

Anyway “Marked For Death” is a movie and that’s what movies do… create a certain false narrative and provide entertainment outside of reality.

In the movie, Seagal’s antagonist is a group of violent Jamaican gang members.

At one point in the movie, the Jamaican gang leader brandishing a sword says to Seagal, “Everybody wants to go to heaven, but nobody wants to die.”

In this case likely referring back to an old Peter Tosh reggae song. I’m not sure who came up with it before him, but he wasn’t the originator. Earlier songwriters and bands used the same phrase including Tommy Dorsey and some older jazz bands.

To the point. The quote taken as a concept means that everybody wants something. They want to accomplish some major goal yet they do not want to do what is absolutely required to accomplish it often because it’s difficult.

Many times, we look for short cuts or some easy way to circumvent what it really takes.

This means you don’t ever get there. You don’t accomplish the goal that could really make a huge difference in your life.

This goal could be finally losing weight and keeping it off, some major fitness goal, some health goal like taking care of what is causing a symptom, improving your finances, or anything else that is meaningful to you.

Too often we just look for some easier way to make things better.