"What Jiu Jitsu Submissions Are Hard To Pull Off?" | Texarkana Jiu Jitsu

“What Jiu Jitsu Submissions Are Hard To Pull Off?”

“In Brazilian Jiu Jitsu which technique is usually the hardest to pull off the Arm Bar, the Triangle Choke or a Choke Hold? I know it depends in the fighter, like how Ronda is very good at arm bars, but in general for most people…?” 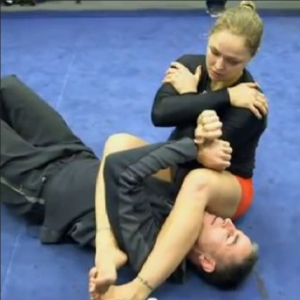 I don’t necessarily think any of those techniques – the arm bar, triangle or chokehold (rear naked choke?) are in general more difficult to pull off in Jiu Jitsu.

All submissions can be learned and a person can become very skilled at hitting them on an opponent.

There are differences in whether you’re talking about a BJJ match, an MMA match, or in a self defense situation.

Generally you take what an opponent gives you but as a person becomes more skilled that funnel a person into the submission.

In self defense, I would favor some type of choke versus a joint lock because it will end the fight regardless of the toughness of an individual opponent.

I’ll rephrase the question to what is hardest for a new person to learn – in my experience in teaching BJJ since 1999, I find that it’s generally the triangle of the 3 that is a little more difficult to learn for a beginner. Armbar is a very close second.

Both the armbar and the triangle choke are very effective. They both use the largest muscles in the body to attack the submission. Really though this is true of all submissions. In Jiu Jitsu, we train to isolate a weak part of an opponent’s body using our largest, strongest body parts.

It’s generally much easier to learn a rear naked choke. The challenge in pulling off the choke is that you have to get to an opponent’s back, control them, and get past their hands to hit it against an opponent. This skill is very, very valuable in all three contexts – BJJ, MMA, and Self Defense.

All the submissions mentioned work very well and all can definitely be learned by anyone so that they can each be used against a resisting opponent.