"Why Is BJJ So Effective In Self Defense?" | Texarkana Jiu Jitsu

“Why Is BJJ So Effective In Self Defense?”

“Why is Brazilian Jiu Jitsu so effective in a fight?” 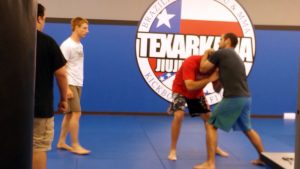 Addressing the standard self defense response,

“Yes grappling works one on one but what happens when you’re on the ground (destroying one opponent) and their biddies start kicking you, throwing chairs, firing rockets at you, or whatever.”

A couple of important points here…

Summarizing everything, grappling works because it’s a critically important range of fighting that is unfamiliar to most opponents. It also empowers the BJJ practitioner with all the things mentioned above, in addition to giving them confidence which so often alone will prevent an attack.